The Siam Commercial Bank (SCB), one of Thailand’s largest commercial banks, said in its latest economic outlook report that the country’s economy may wait until the second semester of 2023 to return to 2019 growth levels.

The SCB Economic Intelligence Center (EIC) revised Thailand’s economic forecast for 2021 downward to 0.7% from 0.9% previously following a severe and prolonged third-wave outbreak which led to adverse impacts on private consumption.

For 2022, EIC forecasts Thailand’s economy to grow 3.4% with recoveries in both domestic and external demand.

EIC expects the situation to improve in the beginning of the fourth quarter from a significantly higher rate of fully-vaccinated individuals, which would benefit confidence and domestic economic activity recovery.

Exports have continued to expand but should slightly slow throughout the rest of the year from a higher base and the spread of the Delta variant, which caused the global economy to decelerate and resulted in supply disruptions in many manufacturing supply chains in Thailand and emerging economies in ASEAN.

In addition, domestic spending would also recover from a resumption of economic activity close to normal levels. However, the recovery would be gradual due to a significantly lower tourist arrivals compared to normal times and headwinds from deep scarring effects during the past two years such as worsening business dynamism, fragile labor market, and high debt levels.

Although the economy would recover next year, the recovery is still substantially below potential level resulting in a large output loss and could affect Thailand’s potential economic growth in the future with the economy expected to return to 2019 levels in mid-2023.

Therefore, the government should consider additional borrowings to support the recovery and restructure the Thai economy. While the public debt level would increase above the ceiling of 60% of GDP, it remains manageable under the low interest rate environment and high liquidity domestically. The government must communicate a convincing fiscal consolidation plan in the medium-term in order to increase confidence in fiscal stability.

The Bank of Thailand will focus towards increasing the efficiency of monetary policy transmission through various monetary policies in order to increase liquidity for households and SMEs. At the same time, the Bank of Thailand will encourage financial institutions to restructure loans according to problems faced by each borrower group in addition to…

In the English-language realm, The Bangkok Post and The Nation have both… 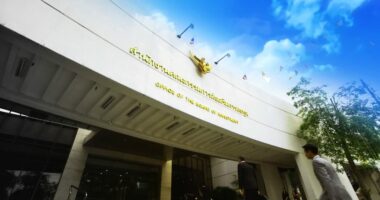 Following the relaxation, feasibility studies will only be required for projects with…